Planning document management from the outset 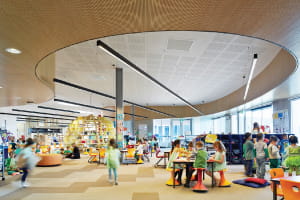 St Mary of the Cross Catholic Primary School opened its doors at the start of the 2014 school year, supporting one of Melbourne’s fastest growing western suburbs. The first school built in Point Cook’s Saltwater Coast estate, St Mary of the Cross started with 170 pupils (P-6), and is projected to grow over the next five years to accommodate around 800 pupils.

All schools are faced with the need to keep documentation on each student for at least 7 years and in some cases, indefinitely. Principal Leon Colla wanted to break new ground and implement a first class document management system from the outset. “At my previous school, the costs escalated to well over $25,000 to establish a paper-based archive system and computer index. It was futile, as it didn’t actually solve the storage problem as the archives continued to grow,” says Colla. “Buying more filing cabinets is not solving a storage problem - it’s creating one.”

When designing the floor plan of the new school, Leon Colla decided to use the space traditionally allocated to filing cabinets in a smarter way, so they allocated space to the library reading area instead. “We knew we had to look at options that gave us a ‘digital’ footprint rather than a physical one.” The vision was clear, so Colla investigated the options available to provide him with a flexible document management system.

Solution: Scanning to Google Drive with Toshiba and Synergetic The school needed a document management solution that was, above all, practical and had longevity. Working with Rob Colonnello from Toshiba Managed Services, Leon Colla discovered that the reality of setting up a streamlined document management system was easier than expected. “After seeing a live demonstration of the workflow options, it became clear that Toshiba Capture & Store software, along with our Synergetic management system and Google Drive would provide an efficient, managed solution.” says Colla. “Once the documents are scanned, an editable master list of files is created. The Toshiba software and hardware connected seamlessly to our existing Synergetic system, and provides easy access to staff who need it.”

Rob Colonnello, an Education Specialist at Toshiba, says that schools are seeking digital alternatives to document handling and the system used by Leon Colla is a great example. “Leon refused to let St Mary of the Cross become burdened by paper- based documents and had the foresight to prevent paper based storage from becoming an issue. Considering the issues we’ve seen at established schools in recent years, this will save some real headaches in the long run.” says Colonnello.

Toshiba Capture and Store is a document capture middleware/software that is simply embedded in the multifunction device, then acts as a bridge between paper and electronic document flows, helping to streamline the processing of information and increase efficiency. “In this case, the software enabled staff at St Mary of the Cross to scan, direct and store their documents using their existing Synergetic document management system.” says Colonnello. “Our software is inexpensive yet powerful, making it perfect for schools.”

The scanning and storing process has been implemented in stages, with existing paper-based archives being progressively scanned by an administrator each week. “There are already paper-based assessments, enrolment documents and special reports existing for each child at the school, even though we’ve been operating less than a year.” says Colla.

“After seeing a live demonstration of the workflow options, it became clear that Toshiba Capture & Store software, along with our Synergetic management system and Google Drive would provide an efficient, managed solution.”

Establishing good document management processes at the outset means there has been only a short technical transition time. “As the software was new to the market, and we were one of the first to implement it, the technicians from Toshiba and Synergetic had to work together to ensure there was a smooth interface between the Toshiba Capture and Store software and the Synergetic document management system.” says Colla. “Our IT maintenance team were also involved to make sure the school network could handle the new technology and functionality. Coordinating all three parties to work together was probably our greatest challenge and in the end it was really a non-event.”

Simplified way of life for staff

St Mary of the Cross staff are integrating document management into their daily practices. “Administration staff are taking on the scanning at this stage, so the protocols can be established and maintained. Other staff leave documents at the office in a small box, and they are scanned and filed then returned quickly.” says Colla. “An administrator initially devoted half a day a week to scanning and storing the backlog. We predict that by the end of our first year in operation, we will have 100% of current documents scanned and stored electronically.”

A benchmark for other schools

The Catholic Education Office has announced that it will be encouraging all Catholic schools to adopt scanning to Synergetic and Google Drive and make the move to digital document management systems.

About Toshiba Capture and Store