Mule's mantra - Attitude is everything.

For nearly 40 years owner of Maverick Welding, Clinton Parmenter, has been known by his family, friends and business associates as “Mule”.

Mule readily admits it is because of his stubborn nature. But being stubborn does not always mean you are close-minded. Plenty of stubborn people open their minds to other perspectives; they just may choose to not be swayed due to their own values, opinions or upbringings. Whatever the case may be, Mule has a mind of his own, which is a valuable quality in business and life in general.

“Being known as Mule has been very good for business because people never forget you,” stated Mule.


A fully qualified boiler maker, Mule early in his career, travelled the length and breadth of Australia plying his trade on major industrial projects.

Striking out on his own as a sole trader he developed a successful business designing and manufacturing aftermarket kits for diggers.

"Implementing Toshiba's solution has seen us achieve 90 percent reduction in costs of printing, enabled us to scan and e-file our paper documentation giving us easier access to documents, freed up office space, massively increase the speed of printing and has lifted office productivity enormously,"

So successful was his reputation in this field he graduated from being a sole trader to forming his company Maverick Welding in 1999. In 2000, he moved the business to its present location at Nebo in Central Queensland. Maverick Welding has successfully grown to be one of the leading design and manufacturers of digger kits in Australia.


“We fit out diggers to Australian standards. It is what they call 'local options' because Australian digging conditions are a lot different from Japan, Canada and Europe.”

Over the past 16 years Mule has grown the business and now employs 19 staff and has an expanding geographic presence with a workshop and parts facility at Ipswich.

Mule says that they work all over Australia. “We just follow the work. If someone wants us to do something and they want it done right then that's what we do. We make things happen. We do general repairs as well but our main game is diggers,” said Mule.

Noticing his customers were having trouble hiring plant and equipment he created a separate business Maverick Equipment Hire. “We have 96 bits of gear from bobcats to dozers that we hire out all over the country.”

Mule says that the main point of difference between his business and others is attitude. “Our company logo and registered trademark is 'Attitude is everything', and that's what we stick by,” he said.

“Growth in the business has been generated through an existing loyal customer base. “We are not against taking on new business but we try and do more for existing customers.”

According to Mule a key aspect of his company's success comes from demonstrating loyalty to their customers, suppliers and being flexible. 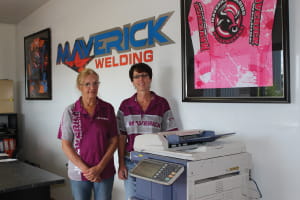 "We embrace technology so when the opportunity came up to look at what Toshiba Managed Services had to offer for our office set up I jumped at the chance.”
As a major sponsor of the V8 Supercars Mule met with Vince Brozak, National Managed Technology Services Manager for Toshiba at a V8 Supercar race event.

“Toshiba is also a major sponsor of V8 Supercars. We had a chat about a range of things including our office equipment issues. Vince really impressed me by coming up and paying us a visit at Nebo in his own time.”

Mule said the outcome was awesome. “Implementing Toshiba's solution has seen us achieve 90 percent reduction in costs of printing, enabled us to scan and e-file our paper documentation giving us easier access to documents, freed up office space, massively increase the speed of printing and has lifted office productivity enormously,” said Mule.

In summing up Mule said he was impressed with Toshiba's "can do" attitude and would recommend Toshiba Managed Services to any business. As Mule says "attitude is everything".